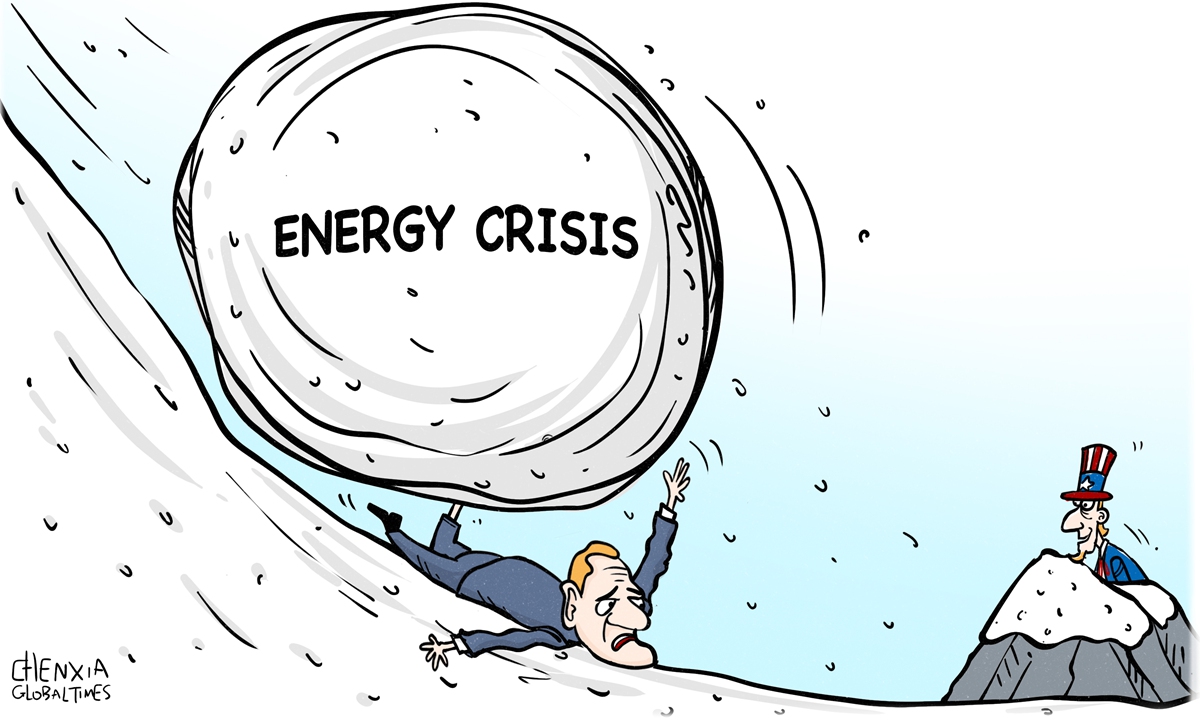 The ongoing energy crisis, which could spiral out of control this winter, is gravely hitting Europe. As energy's share of household spending reaches record highs, protests and demonstrations are spreading across European countries. Is this stimulating a political and social crisis? What could be the way out? George Galloway (Galloway), a six-term British parliamentarian, shared his insights with the Global Times (GT) reporters Li Aixin and Xia Wenxin.

GT: More and more protests against soaring energy prices broke out in a growing number of European countries. Do you think the energy shortage is stimulating, or will stimulate, a political and social crisis within Europe?

Galloway:I think it is the last straw that broke the camel's back. It's definitely now seriously breaking backs. Even in Wenceslas Square in Prague, one of the advanced guards of the liberal, progressive counter-revolutions that occurred at the end of the 1980s, between 70,000 and 100,000 people at the weekend protested in the streets, demanding the resignation of the government by the 25th of this month.

In Britain, the government of the new prime minister, elected by a tiny handful of people, begins on very rocky foundations. They are telling us that they are going to pump up the economy with 130 billion pounds of public money. But public money from where? Which magic money tree is this money going to be pulled from?

The French government has already moved mountains to try and subdue the always incipient and rebellious nature of the French. The German people - I think Germany is the one to watch - also rose up over the weekend with the demonstrations in different regions of Germany against Olaf Scholz, the minority Chancellor in the German parliament.

GT: Will divisions within Europe continue to increase as a result?

Galloway:The very last thing we are is a "United Kingdom." We've never been more divided. But the US, equally, is very far from united. It is also polarized in a way never seen before, even at the height of the McCarthyite hysteria and Cold War hysteria in the 1950s.

The demands of the people are very clear. In both the Czech Republic and Germany over the weekend, the demands were for an end to their country's participation, by all means other than overt military means, in the war in Ukraine. The demands are for ending sanctions and arms trafficking to Ukraine, and for a negotiated settlement to the war in Ukraine.

People know that a settlement is being blocked by the US, by President Joe Biden. It's important that people in China realize the magnitude of the situation that we are facing: Those gas and electricity bills that were hundreds are now thousands. Those, including small businesses whose bills were thousands, are now paying tens of thousands. Those that were tens of thousands are now hundreds of thousands and for big companies, millions to be paid, just to switch the light on, heat the workforce or the customers who come, shop or eat in your place of business.

Mass unemployment is staring us right in the face. The average old age pensioners in Britain will, by the end of this year, be paying half of their total income in gas and electricity prices. Poor families will be paying by April three-quarters of their entire income on gas and electricity. These are literally unpayable bills. They cannot be paid, and therefore, people will not pay them.

I was one of those who refused to pay Mrs. Thatcher's poll tax. It was a mass revolt against an unjust tax, vastly smaller than this new burden of gas and electricity prices. And it brought Margaret Thatcher's government down. It forced her resignation. It culminated in the Trafalgar Square riots. I was there with my then young daughter, now a mother of five, standing on the statue of Nelson's Column as a full-scale riot broke out all around me, and buildings in Trafalgar Square were on fire. That's the kind of long hot winter we are now looking at in Britain.

GT: As New York Times put it, many in Europe have begun to worry that as the economic cost of support for Ukraine grows, popular support could turn against governments that support Ukraine. So, do you think that is happening?

Galloway:It's already happening in a big way. Everybody knows now that it is us that provoked this war, it is us that are preventing an end to this war, and the sanctions we introduced have turned out to be the proverbial giant stone that we struggled to lift only to drop on our own feet.

GT: Do you think more and more Europeans are wakening up to the role Washington plays in Europe's crisis?

Galloway:If they are listening to my shows - and millions do - then more and more of them are very clear about the role that Washington is playing.

We've been mugged. We've been fooled, by a fool. Being fooled by John F. Kennedy, Bill Clinton or Barack Obama is one thing; being fooled by a fool like Biden is really quite another. This is an affront to the ancient civilizations of Europe that we are being led by the nose by a fool, which has taken us probably now over the brink, over the cliff, and headed for the rocks below.

And for what? This war need never have happened. If the Minsk II Agreement had been implemented as both Germany and France guaranteed that it would have been, there would have been no war in Ukraine. The fact is that not only was it not implemented, but that NATO has been building up the Ukrainian military ever since 2014. As a matter of fact, it started even before that. They clearly were long preparing for a confrontation with Russia.

GT: Will European politicians respond to the crisis and the will of people, like making tunings to their stance and policies?

Galloway:They will respond or they will fall.

This is the clear dichotomy. There are no other choices. Chancellor Scholz launched a 65 billion euro package to mitigate this energy price crisis. Reports are saying Truss is going to launch a package twice as large. Bear it in mind that the pound is slightly more valuable than the euro. She's going to announce a packet of 130 billion pounds. Whether it will be sufficient is another matter. 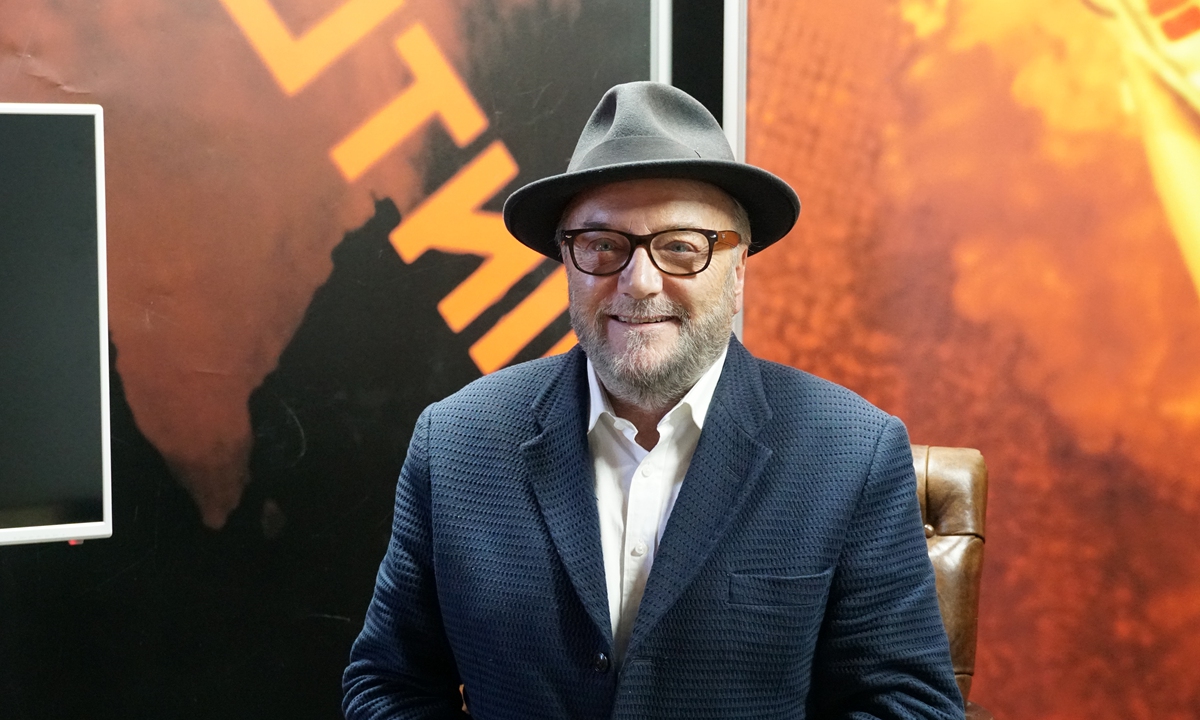 GT: Will the crisis be eased or fixed by the new British prime minister and her new plan?

GT: During her campaign, Truss has strongly hinted that China will be designated a "threat" to national security. Meanwhile, it is widely known that cooperation with China can play a positive role in addressing the energy crisis. Against this backdrop, what will Truss mean for Britain's relations with China?

Galloway:Again, it's an indication of the self-harming nature of the Western response to the current economic, political, and military crisis in Europe. They are doubling down on a set of responses, which are not just manifestly failing. The ruble is the best-performing currency in the entire world in 2022. The pound and the euro have crashed below the value of the dollar. The dollar is being artificially pumped up by the expenditure of nonexistent money for entirely political purposes.

So the self-harming nature, better referred to as suicidal, is exemplified in what you've just said. How is China a threat to Britain's national security? Are Chinese warships steaming up the River Thames? But there are British warships steaming through the Taiwan Straits. We are the ones who formed the AUKUS. Have China and Russia sent flotilla toward us? Have they constructed an alliance that threatens us? Is China's technology stealing our secrets, like every single one of the big tech Western platforms is stealing our secrets? No, we're doing all of that ourselves. Is China imprisoning Julian Assange? We are doing it.

So, our response to the fact that the sun is indisputably rising in China is not to get close to China and enjoy some of the warmth. Instead, it is like King Canute standing on the beach and ordering the waves to go back. The sun didn't need to set in the West just because it rose in the East. We could have mutually benefited from the rise of Eurasia. But we decided instead to try and sink the sun. You can no more sink the sun than you can order the waves to cease.

GT: Is there a way out of the energy crisis in Europe? And what will be the way out?

Galloway:End the arms trafficking to Ukraine, allow the Ukrainian regime to negotiate with Russia, offer a political settlement to the world, and lift all sanctions against Russia. These are the things that can solve this crisis. If they are not done, we are in for the mother of all winters. And I don't just mean the seasonal winter. I mean an economic winter, a political winter, a military winter. We are in for a bitter, bitter period in the history of our peoples.