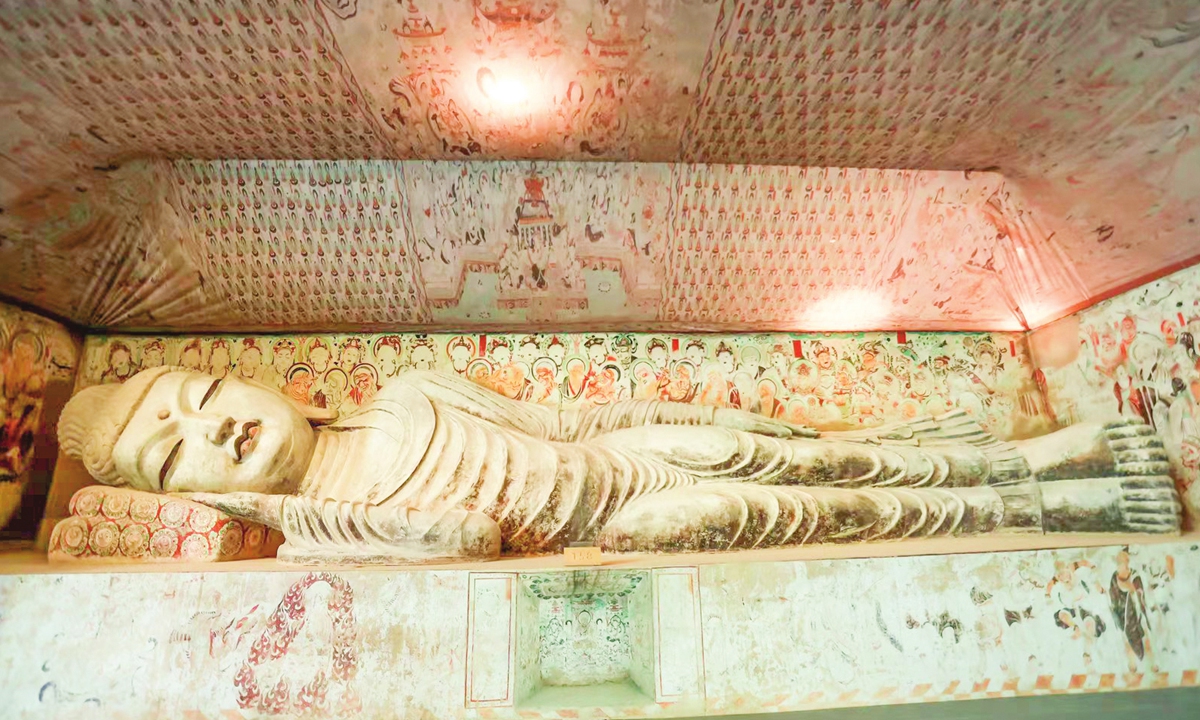 A replica of the reclining Buddha Photo: Courtesy of Beijing Minsheng Art Museum

Housing one of the world's largest collections of Buddhist art, the Mogao Caves are one of the most popular sites that people from around the world hope to visit. The splendid murals, sculptures and buildings in the caves from more than 1,000 years ago, not only allowed the Mogao Caves to become a UNESCO World Heritage Site, but also made the nearby city of Dunhuang a shining pearl along the ancient Silk Road.

As an saying goes, "seeing is believing." A new exhibition on the caves and its artworks offers people in Beijing a chance to appreciate the caves without traveling thousands of kilometers to Dunhuang.

The Trace of Civilization exhibition at the Beijing Minsheng Art Museum includes eight large-scale original replica caves created through the efforts of several generations of Dunhuang researchers over 70 plus years, more than 100 painting reproductions and 20 high-fidelity digitally copied murals, according to Su Bomin, director of the Dunhuang Academy.

"Sitting at the 'throat' of the Silk Road, Dunhuang has been a place where diverse cultures converge and blend since the Han Dynasty (206BC-AD220). These exhibits present the understanding of Dunhuang art by several generations of Dunhuang researchers and truly reproduce their charm of Dunhuang art," said Su.

The caves got their start as a treasure house of art starting from the early Northern Dynasties (386-581), when members of the ruling family of the Northern Wei (386-534) and Northern Zhou (557-581) first started sponsoring the construction of caves and alcoves filled with art. Later, Dunhuang experienced a flourishing period during the Sui Dynasty (581-618) and reached its peak in the Tang Dynasty (618-907), when the number of caves had reached over a thousand.

Based on the different stages of the Mogao Caves' development, the exhibition includes five sections covering the early periods to the end of the Yuan Dynasty (1279-1368).

The reproductions of some of the more vulnerable caves at the exhibition bring the experience of standing inside the caves to visitors in Beijing so that they can see what it was like when artists created the murals and sculptures inside the caves, such as the Western Wei (535-556) depiction of the Avadana (past life) story of Five Hundred Robbers located at Cave No.285 or the reclining Buddha at Cave No.158.

As various civilizations met along the Silk Road in Dunhuang, these exhibits also depict the achievements of the cultural exchanges and integration between China and foreign countries.

"We should look deeply at a civilization, cherish its cultural heritage that sprang from the course of human development, and realize the creative transformation and innovative development of the Dunhuang art," said Su, who also hopes to pay tribute to the generations of people who guarded the Dunhuang culture so that "traditional culture can show a more basic, deeper and more lasting power in the exchanges and mutual learning between civilizations." "Dunhuang is an important crystallization of traditional Chinese culture. It tells the world about ancient Chinese civilization and cultural open-mindedness. The rediscovery of the Mogao Caves has not only nourished several generations of Chinese artists since the 20th century, but also has important significance for stimulating the cultural self-confidence of the entire Chinese society," said Fan Di'an, chairman of the China Artists Association.

Thanks to the digitalization project that the Dunhuang Academy has been working on for years, the reproductions of the vulnerable caves, which can no longer be visited and will only be opened for research purposes, makes visiting these places a reality for visitors.

"Digital representations of cultural heritage can raise public awareness about the cultural relics displayed in museums and are an ideal way to allow more people to appreciate China's cultural treasures without harming them," Fei Jun, a professor at the Central Academy of Fine Arts and an expert in the digitalization of cultural relics and museums, told the Global Times.

Additionally, the exhibition also displays 70 pieces of works by 37 artists such as Chang Shuhong, and Sun Zongwei.